News up to date & videos 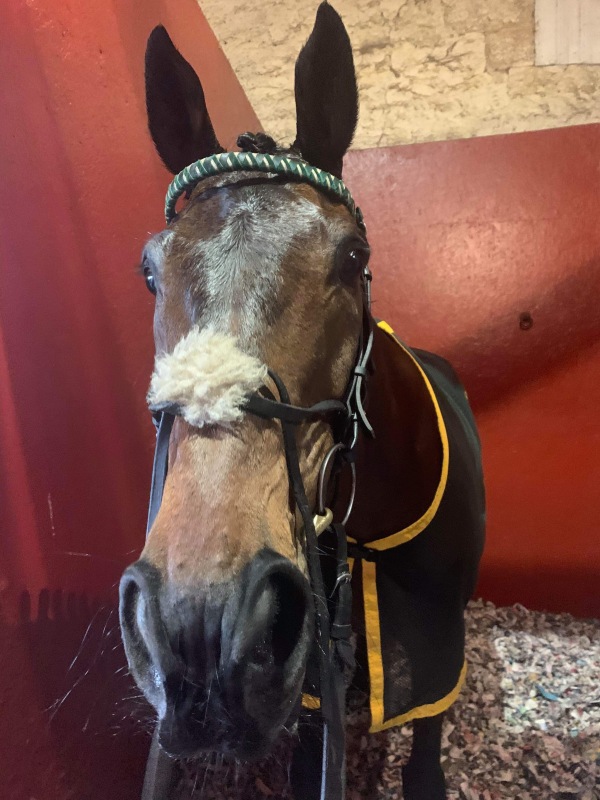 Aniknam who put in such a bold show at HexhamFeels like we haven’t had a second to catch up the last few days but we wanted to recognise some recent good performances and look ahead to the horses about to appear. Firstly what a brave performance we saw from old favourite, ANIKNAM – leading all the way at Hexham on Wednesday for Adam but just collared in the shadow of the post at a generous 16-1.  He has improved with each run and it will be a dream for this lad to appear in top spot for us again one day – he’s been with us since a 3 year old…Julie does most of the riding on him at home nowadays and they’ve built up a great partnership.

Gonn Away ran a very pleasing comeback today for 4th at Doncaster in the Novice Hurdle – on the sidelines for 537 days but she travelled beautifully and Tommy looked after her when she got tired in the final furlong, as she was entitled to after this lengthy layoff. It’s not always about the winning …. you have to have patience being a racehorse Owner and we hope that this will now pay off as she continues her career. It was a similar story with the 2nd of GOWANLAD at Newcastle – frustrating to be 2nd but appreciating how well he had ran in a good 2 year old maiden.

As promised we finally have the video of Top Ville Ben at Newcastle… not the win we all thought was about to happen but a superb performance nonetheless and he is now off 155 for his likely next target, The Rowland Merrick at Wetherby on Boxing Day.

Looking ahead to tomorrow we have SHINE BABY SHINE in the 12.15 at Newcastle – it’s a return to polytrack for her after some decent efforts on fibresand at Southwell. She should get her desired strong  pace in this competitive handicap and it would just set us up nicely for Christmas if Nick Barratt-Atkin can record his first win on her – he is feeling lucky after passing his driving test this afternoon 👏🚗

We start the day even earlier…Lady Kyria in the 11.50 at Doncaster which is a trappy looking 15 runner handicap and whilst she is doing her utmost  you would suspect there will be some easier assignments this winter – but she goes there on ground that will be decent and not the bottomless of recent weeks. Good luck to her Owners ‘Hope Eden Racing ‘ with their winning hurdling mare.

’Ice Pyramid’ is a horse we have been dying to bring back for ages but have had to be patient due to a setback he sustained last year. He is having his first run for 346 days and Ben Curtis rides this lovely staying type at Newcastle in the 1.25 Novice Stakes – we hope will make a decent hurdler for his Owners but this will also qualify him for a flat handicap mark after this comeback tomorrow.

‘Mud Monsters’ – just shows how much horses love rolling in the mud rather than a nice grassy patch. They must love to think how much we struggle brushing them afterwards! To be fair ‘Lady Buttons’ seems quite content with trotting up and down looking regal while the boys get as covered as they can, Top Ville Ben getting particularly filthy 🤣