Today’s Post is dedicated to the lovely mare ‘Savannah Moon’ who we tragically lost at Sedgefield yesterday. Our hearts go out to her Hambleton Racing Owners, many of whom had gone to watch her and had such a sad day. Savannah was running her usual good race and would have been a brave 2nd, the only comfort being that when falling she died instantly doing what she enjoyed with her ears pricked and didn’t suffer. Thankfully Sean was unharmed. She has had a short but good life and always had the best of care. She will be much missed on our yard and by her Owners. RIP Savannah.

Following such a sad start to the day, we had to pick ourselves up with other runners to come. Newcomer for our yard, the jet black ‘Dancing Doug’ ran an excellent race to just get pipped at the post. This was his best run to date and he can record his first win soon judged on this good effort.

We were double handed in the Mares bumper and our biggest priced runner fared  best – a much improved performance from ‘Misu Bula’ at 40-1 who travelled well and kept on dourly for 3rd under replacement jockey, Ross Chapman. Tommy’s mount, the debutante ‘Celtic Legend’ raced keenly early and paid the price by getting tired, Tommy easing her up when beaten.  This was a really pleasing run from Misu Bula who is owned by a small local Partnership and they are looking forward to another bumper run before having her schooled up over hurdles. Her dam was 2nd in the Wensleydale Juvenile Hurdle to Quazar a good while ago!

Today we have three horses heading to Southwell – Shine Baby Shine, Nemean Lion and homebred Lord Rococco. Nemean Lion would be the shortest price of the trio and he boasts good course winning form. He loves quick ground and after a respectable comeback at Market Rasen we would be hopeful of a good effort. Shine Baby Shine has been running better of late on the flat but needs to transfer this back to jumps, and Lord Rococco ran his best race last time without getting seriously involved in the bumper at Market Rasen. Tom Midgley is claiming 10 off him today and he can hopefully improve again with some valuable racing experience against newcomers. The favourite looks rock solid however and won first time out at Wetherby.

We are currently on our highest record of 43 winners for the Jumps season and would like to add a couple more to that figure before Sandown closes the season at the weekend! 🙏🏻 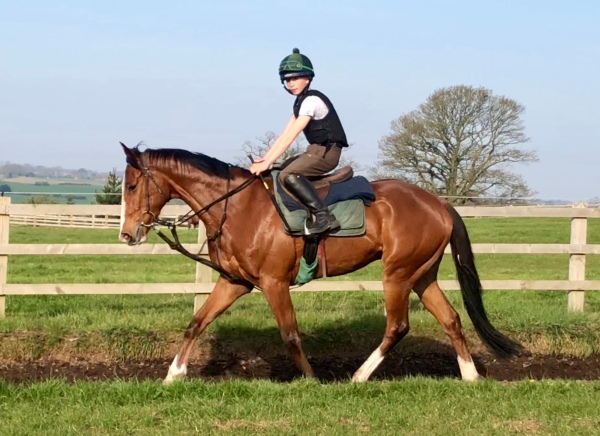 The good looking ‘Lord Rococco’ on his way down to the gallop with young Josh on board.