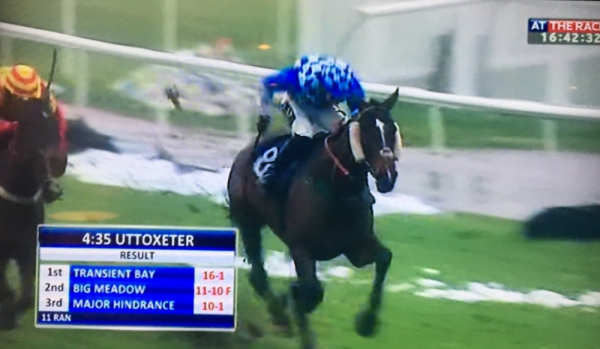 Transient Bay just holds off the favourite in the last

Its been a great week with Episode and now Transient Bay winning for Partnerships…and many of their Owners at the races to see their horses in action. Tommy gave the giant Stenna a bold ride and the big horse replayed him with some good leaps and was sticking his neck out all the way to the line on conditions  that went in his favour. He has won round here twice now and clearly likes the place, winning off a career mark of 105 today, but hopefully the handicapper won’t be too harsh as he was only just holding the favourite and getting a lot of weight. There will be plenty of celebrating tonight in various parts of the country as Stenna’s Owners come from all areas of the UK and this was a particularly special win as we were struggling to get him to find his form this season until now. He has now won four times…not bad for a horse who only cost Phil 5000 euro at the store sale as a big raw 3 year old.

The grey horse, ‘Man in Black’ ran with some promise for third after a stop-start campaign, and ‘Discay’ handled the conditions as Phil hoped he might and didnt run a bad race on his comeback from a break. The only dissapointment of the day was ‘Eastview Boy’ who was never getting into contention and Adam called it a day when his chance was gone in these testing conditions. All horses back home safe and sound after a long, bitterly cold day at the races for Phil, Julie, Sarah, Tommy and Adam.