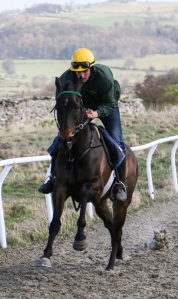 We may not have had a winner at Carlisle today but we couldn’t have been more pleased with our two runners and they are both back home safe and sound.  Just Cameron was first to run, jumped really well for Richie , leading into the home straight and only really tiring  late on up the hill, this was effectively his first run of the season after being BD at Wetherby latest. Two race fit rivals did come past but this was a very good effort and he is a horse to be excited about in the coming winter months – another potential winner in the distinctive red and white ‘boro’ colours of Jean and Paul Chapman.

Hail the Brave taken by one of his owners, photographer, Keith Foster

Another horse who will be giving plenty to dream about is ‘Hail the Brave’  whom Phil bought at the  DBS sales  Spring Sales for small money. We have always really liked this athletic, good moving son of Lahib, and a Partnership was formed of several Owners. If he returned to the sales he would likely recover his purchase price by tenfold after this highly encouraging debut performance – but that isn’t the plan and we hope he can give everyone some exciting days out in the future. The recent purchase ‘Stonebrook’ by JP McManus was only a length and a half in front of him, and he was race fit with experience although it did of course have to carry a penalty and we nicked a further 5lbs off him with Adam’s claim. What was impressive was the tough way Hail the Brave  went about coming up the hill , and Adam felt he really tried, always of huge importance for their future careers.

“Having his first start in the colours of J P McManus but second for trainer Donald McCain, STONEBROOK needed to be pushed out for victory but was nicely on top at the end under a penalty. It´ll be interesting to see in what direction connections now go, but his first run in Ireland already suggests he could be smart when sent over hurdles.Hail The Brave made a perfectly respectable start to his career, albeit he was getting plenty of weight from Stonebrook. A half-brother to two chasing winners, and wearing a hood for this debut, he should be good enough to win an ordinary bumper. 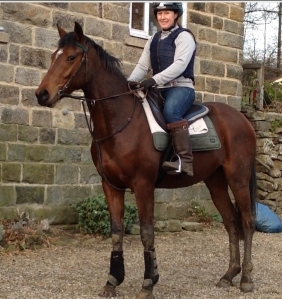 Well, any bumper win is special and denotes that you have a horse of quality for the future. Phil will be looking for a suitable opportunity in the next 4-6 weeks all being well.
It promises to be a pretty quiet week with more runners planned for Boxing day and beyond. We do have a couple of entries for Catterick on Tuesday,  3 x winner this season Mrs Eff has been entered in the new ownership of Ingham Racing Services, and Iktiview is back in action in a handicap hurdle.
Esk Valley Lady is now broken in and riding away, she is pictured on the left  with Kim on board and here is a short video of her on her first day riding at Castleton.
http://youtu.be/k8ehT0tBy68