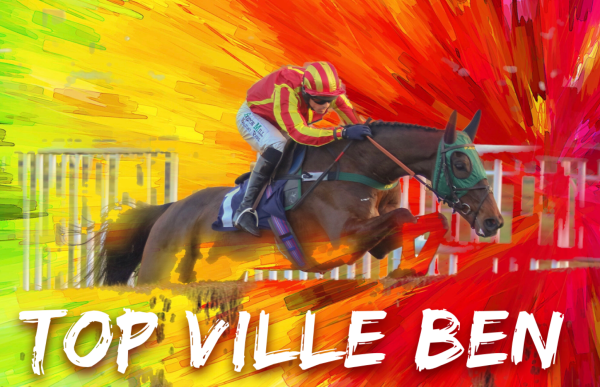 The sun is shining at Ascot and our star novice Top Ville Ben is fully tuned up for the 1.35, the Grade 2 Reynoldstown Chase over 3 miles. He looks in tremendous order and travelled down yesterday afternoon so he could have a good rest before he runs.  Sean Quinlan rides for his Owners ‘The Harbour Rose P’ship’ It’s an ultra competitive 5 runner field and this is Ben’s first right handed race this year. He has shown good form this way round in the past but he has definately shown his best form going left now he has learnt not to hang. We’ll certainly learn more about him today again and this will tell us if he can be as effective on better ground right handed – it’s not a given that he will,  and we won’t be disappointed if he runs a good race but doesn’t win – we already know he’s a left handed machine on soft ground and he could quite easily make up into a live Grand National prospect for next season. He handled the hills of Hexham so if we had some soft ground at Cheltenham it would be a very different test to today’s race.

Safe return for horse & jockey is all important, we’ll be watching nervously. Jennie will be leading him up and all eyes will be glued to the TV by Team PKR – you can watch the race on ITV 4 or Racing TV.