Allmyown bidding for a double over fences

It couldn’t be busier for us today with runners at Ascot & Carlisle over jumps and Doncaster on the flat. Our Ascot runners left yesterday with Katie & Julie and they settled in well last night ahead of their assignments this afternoon.

Looking at Donny we have Amateur Jockey Henry Newcombe having his first ride – Henry is a hard working member of our Team here and we are all looking forward to seeing him make his debut on the experienced ‘Pullman Brown’ who is returning from a long break due to a knee injury he sustained on his last run.

Fingal’s Cave kicks off the flat proceedings in the first and won’t mind the ground – he ran some decent races last year when everything fell right for him.

Fingal’s Cave in front of this trio

The 3 year old filly ‘Rayna’s World’ is one we are looking forward to this summer and although Phil feels he has left a bit to work on – she had a tendency to run up light – she should run a nice race today and there will be further improvement to come.

Rayna’s World with Henry on Friday

Archippos completes the quartet – he won this race last year and is in good form at home but he did show his best form over further last year and will need a strong pace today to be effective over 1m 2f. 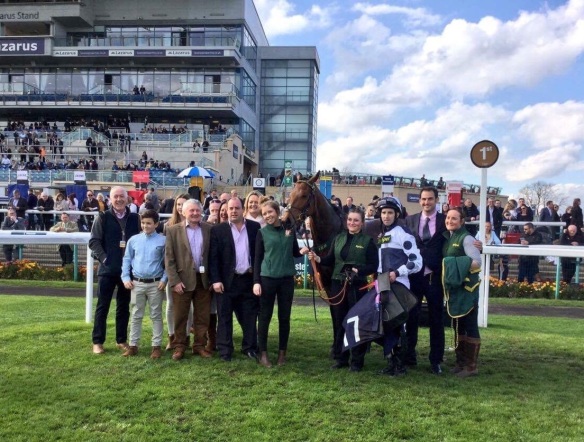 ‘Archiposs’ winning this race last year with a Paddy Aspell in the plate, but he’s recovering from a broken leg and we wish him a speedy recovery.

Looking down South to Ascot it’s two big chances for Tommy in the Juvenile Handicap Hurdle on Shine Baby Shine & the Conditional Jockeys 3 mile hurdle on Top Ville Ben. The filly has a tough task against the boys and is priced accordingly but she has done nothing wrong so far and it is a handicap so we see no reason why she shouldn’t give a decent account of herself and this fills a nice gap with 3 weeks to the fillies juvenile handicap at the Mares only meeting at Cheltenham. It’s serious prizemoney on offer and if you’re not in it you can’t win it! 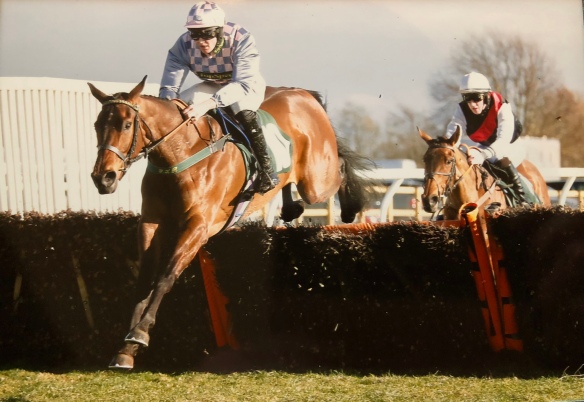 Topville Ben is going to make a seriously nice novice chaser next season but we can’t run him in one yet in case he de-novices himself so for now he has to find life a bit tough off his lofty mark in staying handicap hurdles. He has loads of ability and should find this stiffer test more to his liking than the Lanzarote at Kenpton. There’s no doubt he’ll be jumping off in front with his big ears pricked in his green hood, he has so much enthusiasm for the job, and Tommy will be looking forward to getting the leg up on this classy horse for the first time at the races.

And finally to Carlisle – Simon taking Allmyown who is running with a 7lb penalty as he is due to go up ten pounds for his easy Wetherby success. Adam is back in the plate and track, trip and ground should be fine – he won his point to point going right handed – there’s just the chance this will come too soon but he seems to have come out of Wetherby fine and you never quite know until you run them. Good luck to his Owners John Birtles &  Bill Allan and to ALL our Owners with runners today – may they all come back safe and sound to their boxes at Green Oaks tonight.