And just in case Racing Post forget to give us a STABLE TOUR(! ) we are being one step ahead and doing our own National Hunt Preview, in depth, over the course of the coming week. We have what we think is our strongest team of jumpers yet to brighten up the chilly days ahead……this preview will run all throughout the week, starting this evening, Sunday September 24th and conclude next Sunday.

Our NH season ‘proper’ has already got off to a good (if not frustrating) start with a win from Nemean Lion at Sedgefield, but then a host of 2nds and 3rds – the horses running really well but just hitting the crossbar. Today was just another example – the recently bought ‘Zig Zag’ running an absolute blinder for a 4 year old under top weight at Uttoxeter in a competitive handicap – a close 2nd and giving weight away all round. He looks another bargain buy and one to have lots of fun with in a decent grade for his new Owners…

Zig Zag, without the headgear, was making his debut for connections having recently left Joseph O’Brien. He gradually crept into it and looked a big danger, but the winner just held him off. He has yet to land a handicap over hurdles but this was a step back in the right direction. 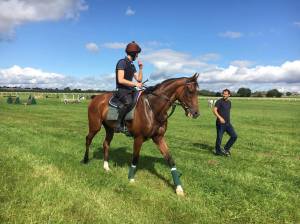 The 5 year old, Nemean Lion was also bought out of the O’ Brien yard, via Goffs UK, and he has run two good races for us so far – a gutsy win at Sedgefield was followed by  2nd back there, just denied by a short head on his second visit. This was what Racing Post have had to say about his two performances:

Not a bad novice event. NEMEAN LION refused to give way in the home straight and made a winning debut for trainer Phil Kirby, who also won this race in 2013 with Sky Khan. It was a big step up, but he did show ability in Irish bumpers and his new yard has a habit of improving recruits. It’s not hard to see him getting further

followed up after leading. He should find his level in handicaps when sent into that company.

So close at Sedgefield for Tommy & Nemean Lion.

Nemean Lion and Zig Zag should both  continue to be seen to good effect before the ground gets too soft.

Another couple of good performances has been seen by BOHERNAGORE who has had a double of 2nds at Uttoxeter and Sedgefield. He was only beaten a neck the first time. Its so frustrating when these horses find one so well handicapped in the race, but that has been the case for him so far.

Racing Post: Sound form for the grade….Bohernagore, whose yard took the preceding race, has to be rated as unfortunate to have bumped into a progressive winner as he was well clear of the remainder. It was much better again with a hood refitted and he was 5lb lower than his previous winning mark.

Bohernagore ran another gutsy race from the front but, like at Sedgefield, he ran up against a well handicapped opponent. He isn’t badly treated himself despite having gone up 7lb.

Its always a nightmare when horses go up in the handicap for not winning – Bohernagore has now climbed 13 pounds for his 2 seconds – from a rating of 85 to 98, and he now runs off a career high at 8 years old – we hope he can still make amends for these defeats if the right race can be found – he likes to dominate but was not able to set a sensible pace on his most recent visit to Kelso.

Another new recruit to the yard is the good looking novice hurdle winer, Minstrel Royale, and he was

3rd on debut for us  at Southwell, lack of a recent race just catching him out against race fit rivals. Another Goffs UK purchase, the ex Nicky Henderson trained horse  has some new Owners and looks to be a decent handicap hurdler for our winter team. Interestingly he is a half brother to the top class chaser, Barbers Shop who was owned by The Queen. By Kayf Tara, he has the build of a chaser but the jumping technique of a hurdler, and he’ll stay over the smaller obctacles this winter.

The brown 5 year old maiden under all codes,  ‘Dubh des Champs’ was a very cheap purchase by Phil at Ascot, but the son of Robin des Champs is out of a Presenting mare, and we’ll take our time with him after a debut with some promise at Cartmel, 4th in a novice over 2m 6f for Tommy. he origibally cost £48,000 as a 3 year old, and we believe he is worth persevering with.

And so to the horses due to be out in the coming weeks, and these include  the ex-Henderson trained

‘Top Ville Ben’ and ‘Queen of our yard’ Lady Buttons who have had a pipe opener on the flat at Salisbury, and have come through the outing just as Phil had hoped. Interestingly, both of them are by the now deceased National Hunt Sire, BENEFICIAL. Top Ville Ben achieved a Racing Post flat rating of 100 for this effort – what a performance on his flat debut –  he is an exciting hurdle recruit for us this winter and  runs in the same Ownership as our multiple winner, ‘Courtown Oscar’ and the talented but fragile, ‘Aniknam’.

Ben is the winner of 3 of his 7 rules starts to date, and he also  won his only maiden point to point as a 4 year old by 3 lengths in April 2016. With an official hurdle mark of 130 he will run in high level handicaps, and has already pleased us with his schooling so far. While he was initially going to head novice chasing, this has been put aside for a further season over hurdles –  and a tilt at some decent flat staying handicaps next summer may well be on the cards. 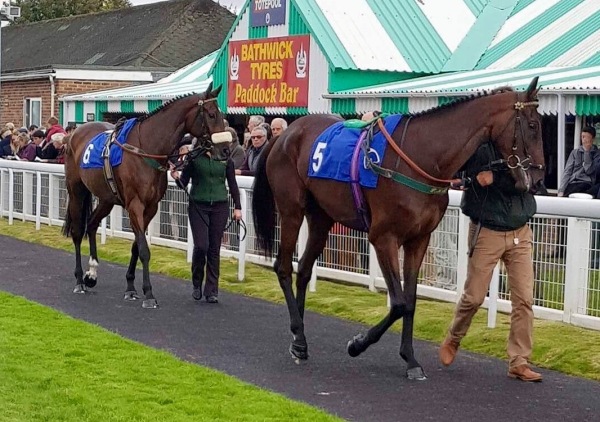 Top Ville Ben & Lady Buttons in the paddock at Salisbury

Racing Post analysis: Top Ville Ben showed up well under an positive ride. A winner of a point and a useful sort in bumpers and over hurdles for Nicky Henderson, this was his first ever start on the Flat and his debut for Phil Kirby after changing hands  in May. He may have been flattered by his proximity to the winner, but he’s entitled to have needed this after 141 days off and is well worth persevering with in this sphere. 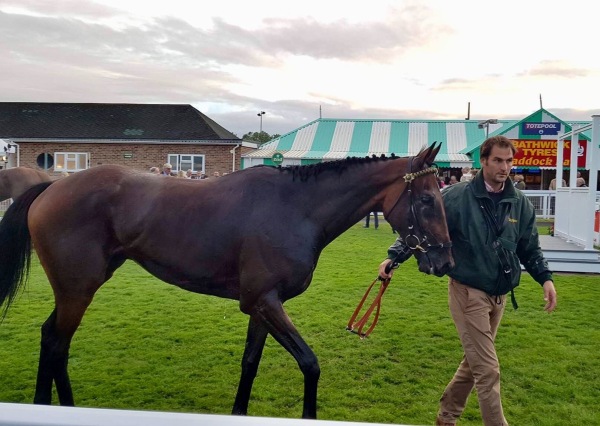 Top Ville Ben after the race at Salisbury

stone to a 2 mile Listed Event for mares on November 4th at Wetherby –  everything is going to plan for her first NH outing of the winter season. At 7 years old now we feel this could be her best season yet, and although it makes Phil and her Owners understandably nervous, they haven’t ruled out going novice chasing at some point as she is a bold, scopey jumper and could be just as good, if not better when going chasing. We’ll get the hurdle run out of the way first though, and some hurdling black type would be great to add to her blacktype achieved when a photo finish 2nd in the Mares bumper final at Aintree.

We look at how the likes of Courtown Oscar, Little Bruce, Suggestion, Baracalu, All my Own, Sakhee’s City, Gonn Away & Askmemore,  are going…