The racing game is all about dreams and if you aren’t an optimist it’s the wrong sport to be involved in! We are lucky to have some gorgeous young horses to dream about on our yard at Green Oaks and this morning we’re taking a look at some  of them plus introducing you to our young team who fit in great with us  thirty and forty somethings….

First up ‘Robin Des Chapp’ – the Robin Des Champs half brother to Lady Buttons. A huge 3 year old, already broken in and cantered away for his now full ‘Pinnacle’ Partnership – you won’t see him on a racecourse until the backend of next year and he’s a chaser in the making – he’s light on his feet and a tremendous looking individual.

If you have regretted not getting involved with him we may have a second opportunity available and that’s with our homebred year younger PRESENTING 2 year old, the second and final half brother to Lady Buttons as sadly we lost the dam Lady Chapp in 2017. He looks a lot like Buttons but has that Presenting look to him too, and has great limbs.

‘Stanley’ as he is called at home is another gorgeous looking horse and we are already getting lots of interest in him as a 20 Owner Partnership horse. If we confirm, the name is already selected – we will be calling him LADY’S PRESENT. He was Lady Chapp’s final present to us and given his Sire’s name there could be no more perfect choice. Watch the for sale page to see if we decide to go ahead and launch this Partnership but you can register your interest by emailing pippakirby@icloud.com . Presenting died this Spring and Stanley comes from one of his final crops – no stallion has bred more Grand National and Gold Cup winners and you can imagine why we want to keep him here to train rather then than send him to the Sales. Denman, War of Attrition, Ballabriggs, First Leuitenant… the list of top class Chasers he has sired is endless and the Nicholls Trainer ‘Present Man’ is flying the chasing flag for him this season.

Lady Chapp with her Presenting foal, Stanley back in 2016

We have a lot of smartly bred fillies here and with Mares races having such an extensive programme it makes sense to have a mare in training with their future value being assured if they are successful. New Owners Peter & Nina Bryan are delighted to have recently purchased the 3 year old Yeats filly we bought in Ireland as a foal – her 1/2 brother Dubh Des Champs winning yesterday and instantly improving her ‘page’ while she continues to grow up. Expect to see her in Mares bumpers next Winter season.

In one of our barn quarters this Winter we have 4 yearling fillies – all good friends who have spent the summer together and now stand round the haylage ring getting bigger by the day!

The yearling fillies this Summer

One has already found an Owner, the smart Soldier of Fortune x Molly Cat pictured above on the right- but our 3 homebreds by MARTALINE, PRESENTING  and SIXTIES ICON are all for sale to stay on the yard. Buying now means a waiting game but trying to buy them when they are 3 is an awful lot more pricey. 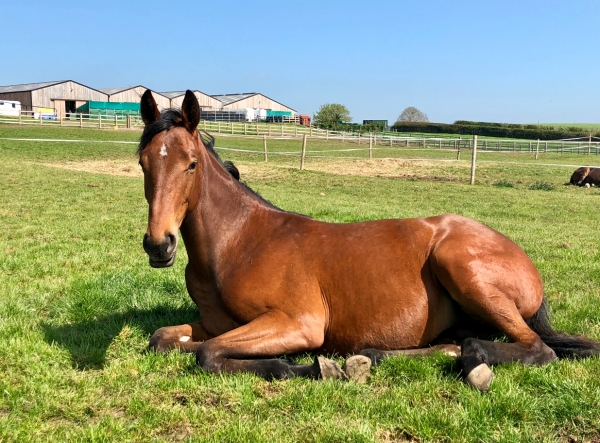 Martaline yearling filly our of 130 rated 5x winning mare, Helen Wood. Her half sister in training with David Pipe was 2nd first time out in a bumper. This filly tall, athletic and is by the best NH sire in France who now commands a €15,000 stud fee.

Lady Chloe’s Presenting filly as a foal – she is a correct and well grown yearling who should have a good  mix of speed and stamina, her dam won on the flat as well as over hurdles and it’s a prolific winning family.

The third homebred is Ginny who is a half sister to our 8 times winning 135 rated Chaser ‘Agglestone Rock’ by the St Leger winner Sixties Icon who is breeding plenty of winners on the flat and over jumps. She is a big strong chestnut and should be ready to run in Juvenile  bumpers having quite a lot of flat speed in her pedigree. 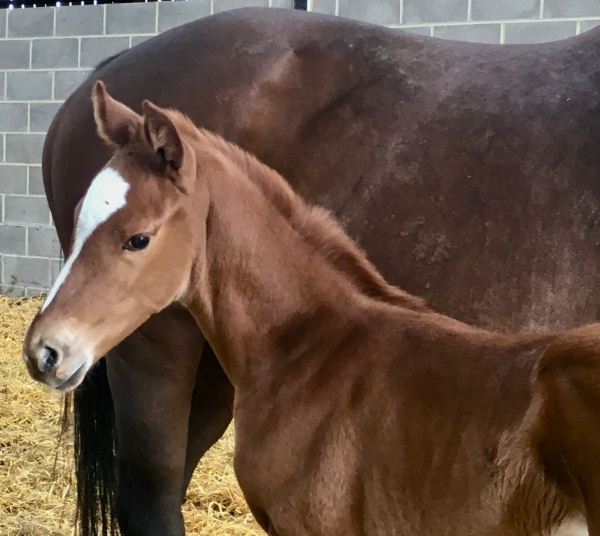 Ginny as a foal

The good moving Doyen filly out of Lady Chloe

On to the boys and we have a smart looking 2 year old by YEATS for sale, un named, who looks every inch a bumper horse – the dam has bred 2 winners of multiple races so far. He will go to the store Sales if not bought privately to stay on the yard – price £20,000 – his FULL BROTHER made £34,000  at the store Sales last year. He has to be value.

We are looking forward to running PENNINE CROSS in bumpers in the New Year – known at home as Gary, this Shirocco bred 3 year old is out of Cheltenham Festival Winner, Gaspara – and he’s doing all his homework well, he’s a tough customer with a huge personality.

One to watch on her next start is the 4 year old Beneficial filly ‘Dares to Dream – 2nd on her seasonal debut in a bumper at Kelso. This filly has already schooled well but is likely to have another bumper outing before she goes over timber. She has a great attitude and is a Mares staying hurdler in the making. Phil and I bought her at Goffs IRE as a foal and she is jointly Owned by the Clarke and Long families. She is out of a half sister to the former top class, Mr Mcgoldrick. 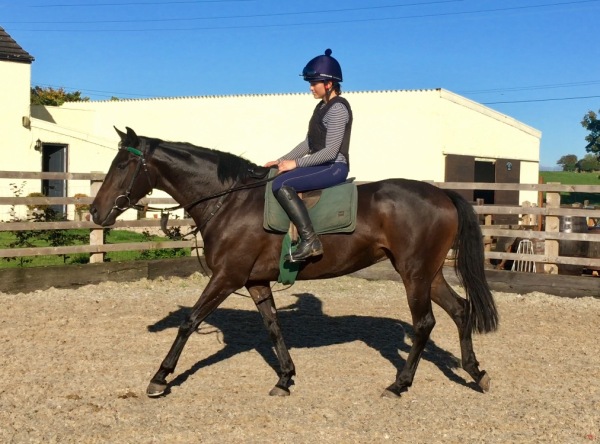 Part 2 of our youngsters in the next few days but here are some of our young team riding and looking after them…. 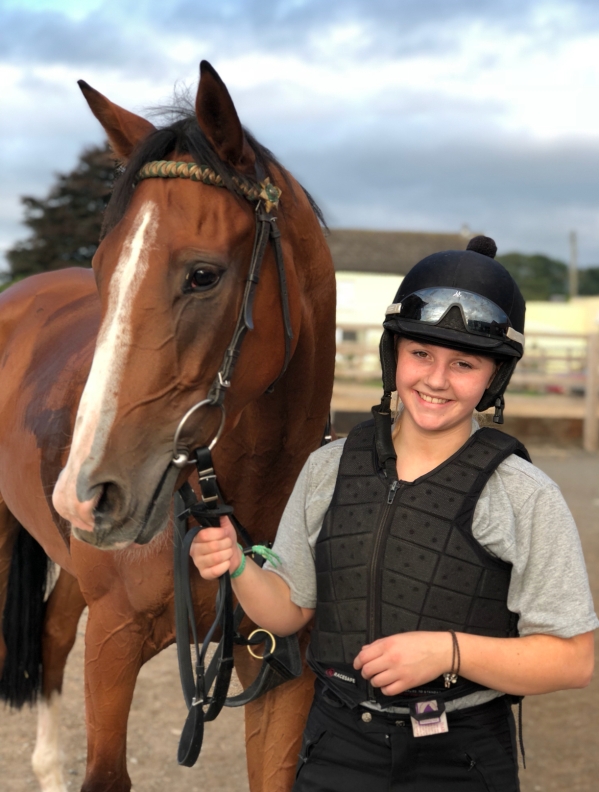 Whitby born 18 year old HANNAH WELFORD joined us a couple of months ago and continues to please us with her enthusiastic approach to work. Hannah has enjoyed plenty of success showjumping on her own ponies and would eventually like to hold a jockeys licence. She lives in the staffhouse at ‘Hillcrest’ with our other young members of staff….

HENRY NEWCOMBE has the position of Pupil Assistant under the mentoring of Simon, Henry is a much valued member of PKR who also holds his Amateur Jockeys Licence. Henry lived locally at Northallerton before moving into Hillcrest and it feels like he’s been of the team for years. He is a quiet and sympathetic rider and can settle our hard pullers beautifully.

Jodie in the winners with Richard Strauss

JODIE HAND joined us when she was just 16 and we were in awe of how brave she was moving out of home and into a flat by herself for 6 months while getting stuck in on the yard. She is a hard worker with an excellent work ethic – it was a happy day when we got the keys to to Hillcrest and she could move in with her friends. Jodie enjoys turning out her horses beautifully at the races and wins many BTO’s .

NICK BARRATT-ATKIN, 16, joined us full time this Autumn after riding out in the school holidays for a long time. He is a lovely lad, a talented rider and is really looking forward to getting out his Apprentice licence having  ridden plenty of winners in pony races at the top level. It’s took a while after moving out directly from home but he is now more than capable of rustling up his own dinner!

SAM MOATE – Taking the 5th and final bedroom in Hillcrest is Sam who has just joined us directly from graduating from the Racing School. It was a shock to the system for a couple of days but Sam is enjoying his work and quickly adapting to life at Green Oaks. He is a quiet, capable rider and is enjoying building a partnership with young horse, Lord Rococco amongst others.

YOUNG Point to Point jockey, CAITLIN HEPBURN is another new face at the yard and one who brings plenty of experience riding through her childhood. Caitlin is looking forward to riding in Points again this winter, they breed them tough up North! She was given the official green Topspec PKR jacket this week and we hope she is here to stay!

MEGAN DENT – Returning to the fray this Winter, 17 year old Megan has been increasing her social media and office work for us  and combining it with going racing and working on the yard when we’re busy. She is currently writing her first yard News Letter for our Racing Partnerships and we look forward to publishing it on our dedicated website page. Megan’s favourite horse is Nautical Nitwit and it was a huge day for her recently at Wetherby, leading him up as winner of The West Yorkshire Hurdle.