A wet Saturday at Catterick!

Cavalieri is back in action again this afternoon at Catterick – the 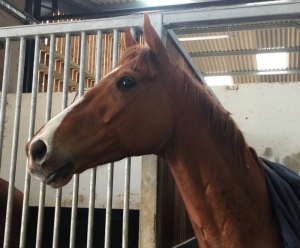 brollies are out but it doesn’t look like many in his race want the soft ground so he is taking his chance with it being so local, and he is fine after his run earlier in the week. he is joined in he horsebox by Fingal’s Cave in the 7f race – Fingal’s goes on all sorts of ground although his optimum would be better ground – he has been running well without getting his head in front but missed the break by miles last time and the run can be discounted, he reared as they left the stalls.  Good luck to our Owners of both horses.

We were pleased with the debut of Shine Baby Shine at Haydock yesterday evening – she travelled well through the race and will have learnt plenty from this experience. Jockey Paddy Aspell had only positive comments to make afterwards.

Marmot and rebel as a foal

Today is an important day for John Hanson of Ace Bloodstock Ltd as the first foal he bred  from his mare, ‘Marmot Bay’ runs in the 2.40 at Beverley – a Plus 10 conditions race which is a big ask first time out, his new Owners must think plenty of him. John sold ‘Rebel’ now named  ‘Cool Spirit’ as a yearling at the Goffs sale, and we are all hoping for a good run – John has a yearling by Garswood to sell this time, a Brazen Beau colt foal on the mare now, and she is scanned in foal to Charming Thought. Being by the ever popular Kodiac, she proved a good buy at Ascot sales.

John and Phil had reason to celebrate earlier in the week – their Greyhound ‘Izzyindy’ (named by Phil and our girls!) won for the second time in three runs, and set a really good time. He came from Ireland recentley and they are having great fun watching him run.

It may be pouring today but yesterday was glorious and Phil took Jo Ford to Middleham for some experience of an outside piece of work on her new horse Arabian Oasis, her mount for the Macmillan Charity race next weekend. The trip went well and Jo is nervously excited about her big day at York coming up.

It was also a good day to video our latest Green Oaks foal arrival in action – she is surely one of the best looing foals we have bred to date.